For the front of us home we used the 90% solar screen fabric on most all of the windows with the exception of the 3 windows to the garage there on the left hand side. Those three Windows include two 35 by 72 inch Windows and one 75 by 29 inch arched window. The customer chose to put solar screens on these windows leading into the garage, but he downgraded the fabric from the 90% to the 80% solar screen fabric. You will see that there are two windows there on the right side of the garage that also feed into the garage that are 35 by 72, he put the 90% fabric on those because those are flat out west facing windows. 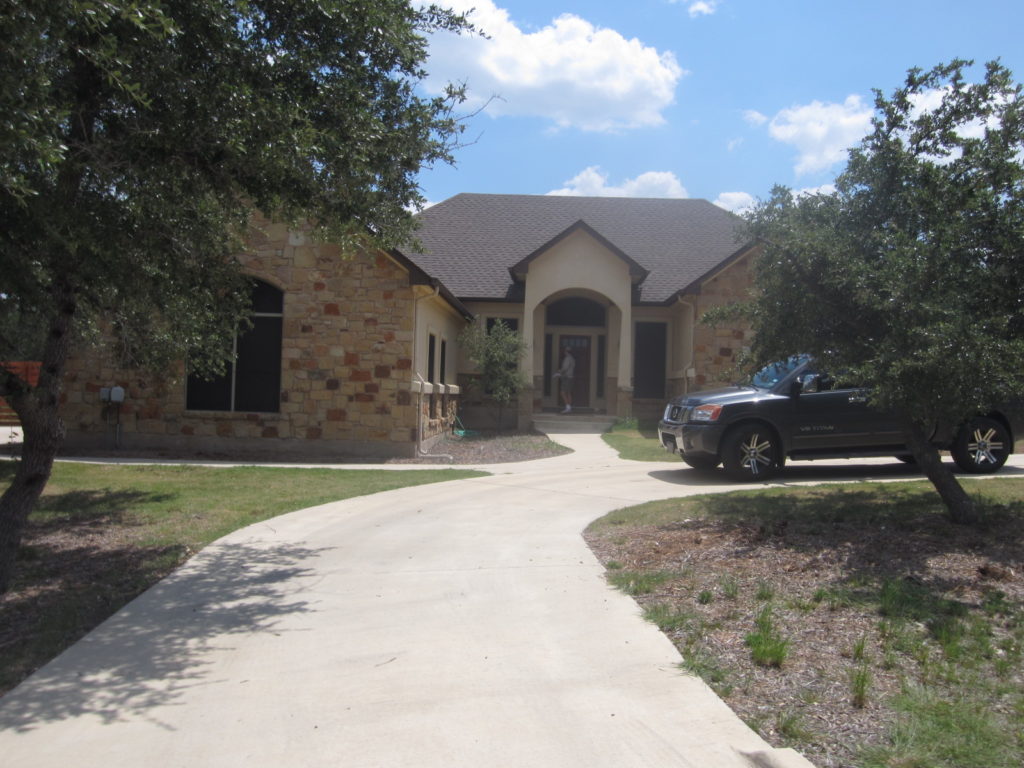 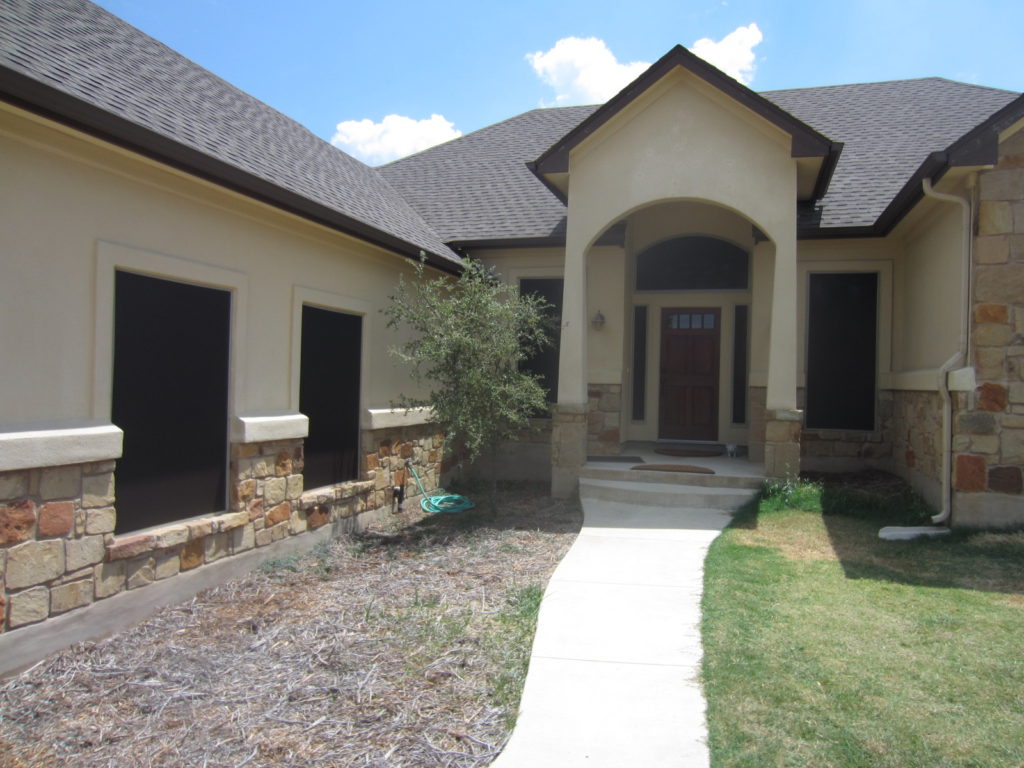 Front of home, all windows received a solar screen. 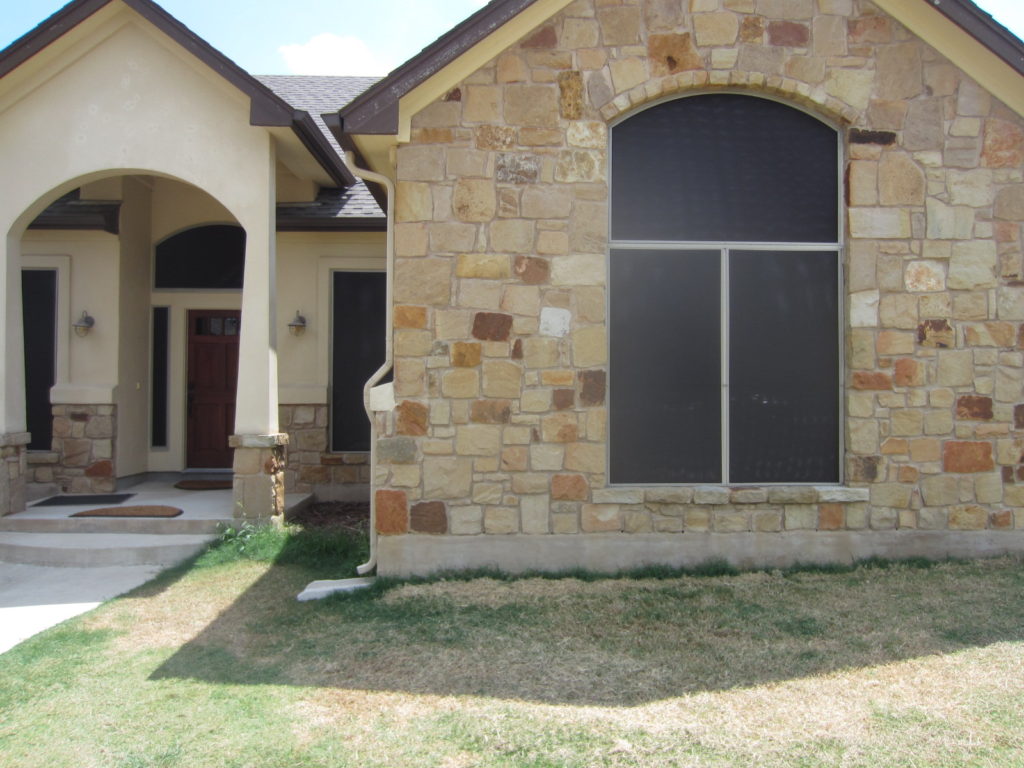 The following picture shows a grouping of three windows. Because it’s three individual windows, its (2) 35 by 72 inch windows with a full-sized, extremely large, 70-inch by 40-inch arched window, all those windows together equals 3 windows. Being that there are three Windows here we used three solar screens, 1 solar screen per window. 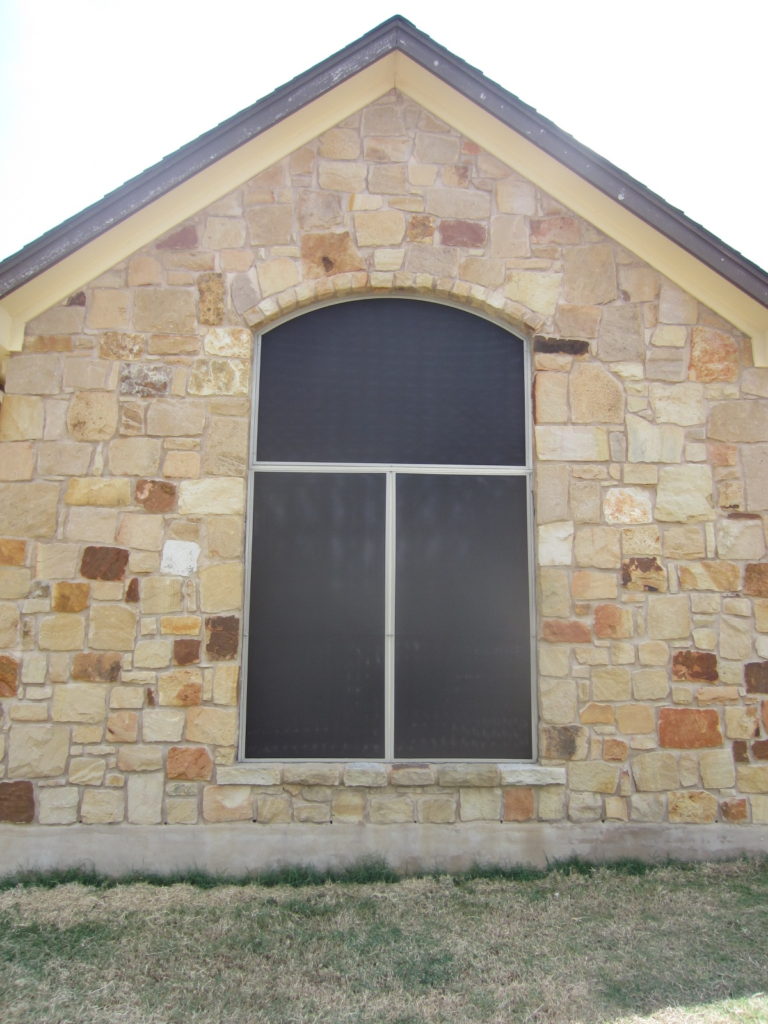 All of these windows that open up and down are made to hold full sized solar screens. Meaning at the top of the window and at the bottom of the window there are lip provisions, allowing for a full size screen that is spring loaded to sit into that upper track and that lower track. 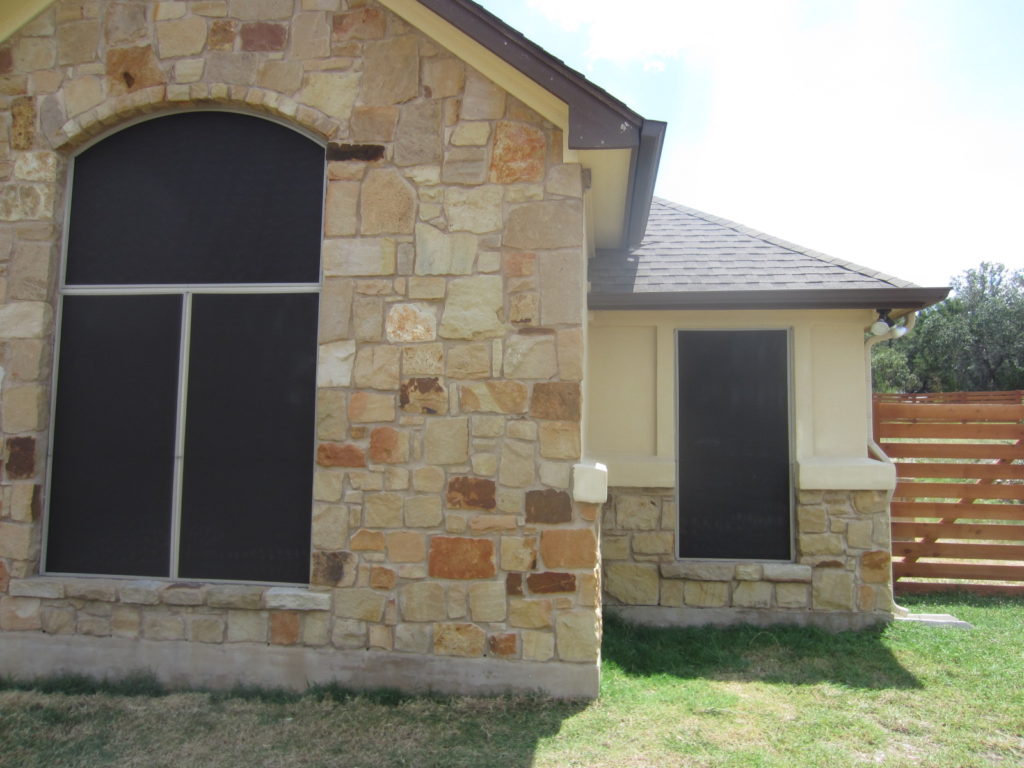 This home looks great with these beautiful chocolate brown solar screens. Using that champagne frame just accentuates the screens and color combination with that Sandstone exterior.

Just think to yourself, imagine, what the front of this home would have looked like if these windows here to the garage, the windows to the left, were left uncovered. People will often ask about leaving Windows like this uncovered. If these windows here to the garage did not have these beautiful solar screens on them, it would have just looked odd and funny. This is a beautiful home, and by putting Austin TX solar sun shade screens on all of the windows, so that the whole house is uniform and appearance, just makes this installation look beautiful. 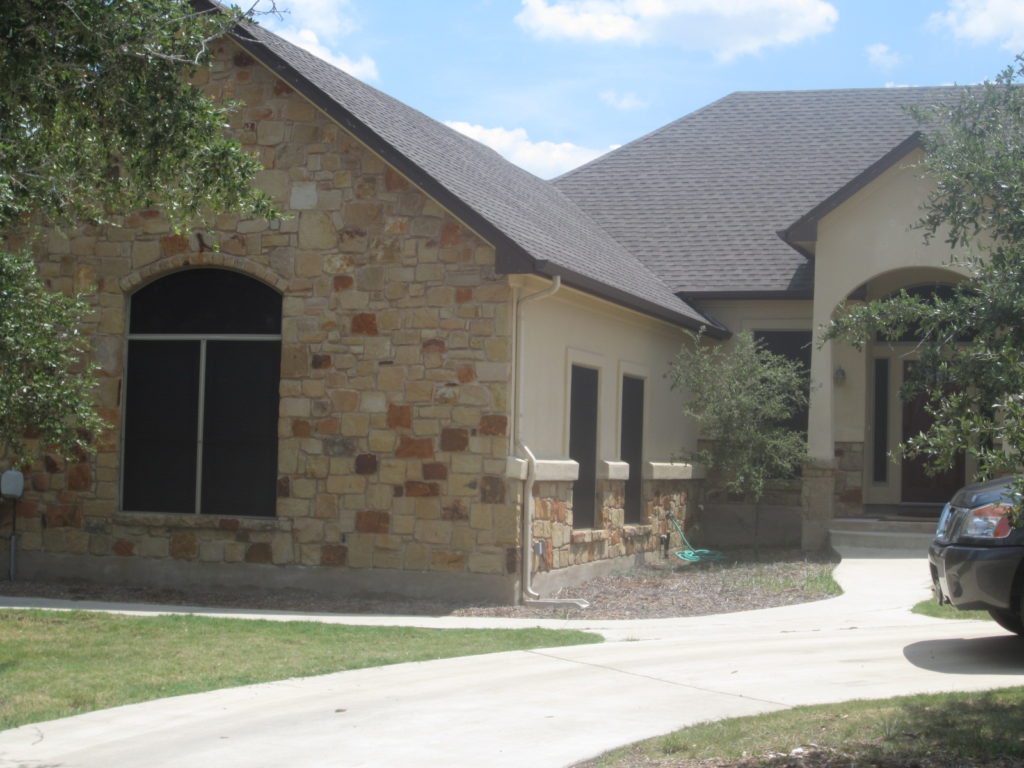 Front of home, showing that all windows received a solar screen. 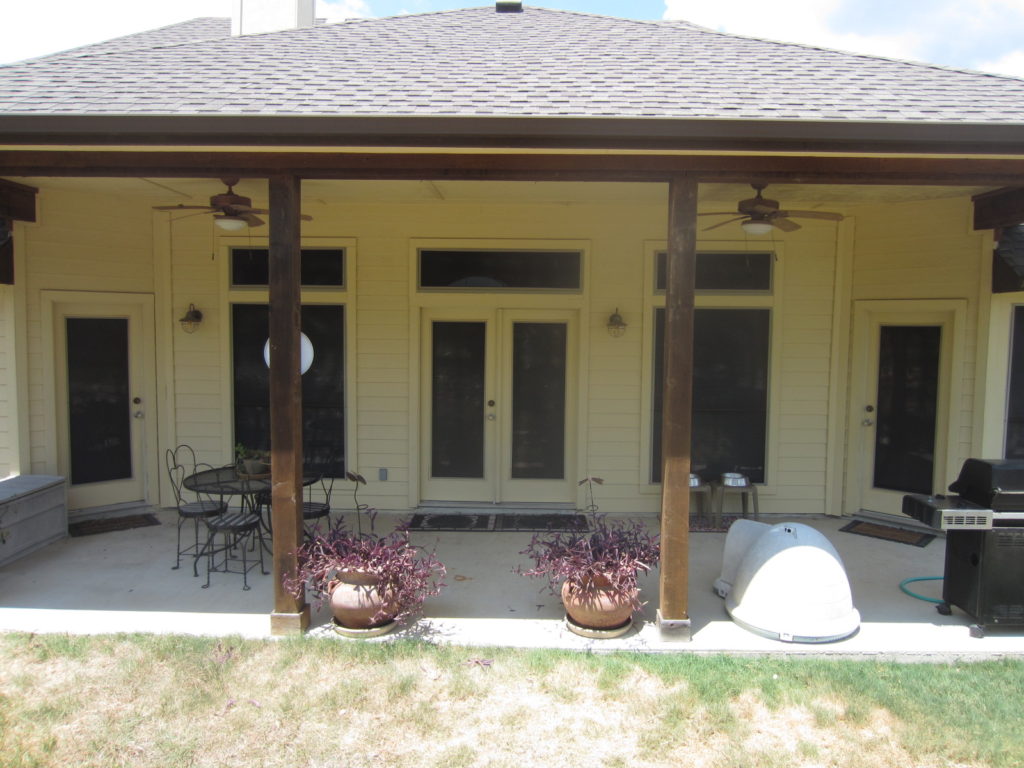 Look at how nice the screens look at how nicely are made. There’s no way Venus, the screens are bowling, the corners are mitered beautifully, they fit very well within the windows. Are solar screen installations are impeccable.

There are 14 windows and total on the back of this home. Each one of these windows received a solar screen.

Sometimes homeowners try not to use the same color framing around the solar screens that we build for their door, as that of which the solar screens for the rest of the windows are made out of. The reason is homeowner told me before if I’m going to be using the chocolate fabric why don’t I use the Brown framing to try to make it look seamless. And my answer to that is yes while you can, it looks odd to me I seen enough of these were people have done that and in my opinion it’s better to keep it all looking the same. It looks odd if you have windows with say in this case champagne Framing and then your doors have brown framing. It just looks odd. It looks odd when you look at all of this in totality. So even if this customer’s doors were brown I would still say to use that champagne frame.  If you have solar window screens with one color Framing and then solar window screens installed on a door with another color of framing, it is a contrast, and it looks out of place, it doesn’t look consistent. 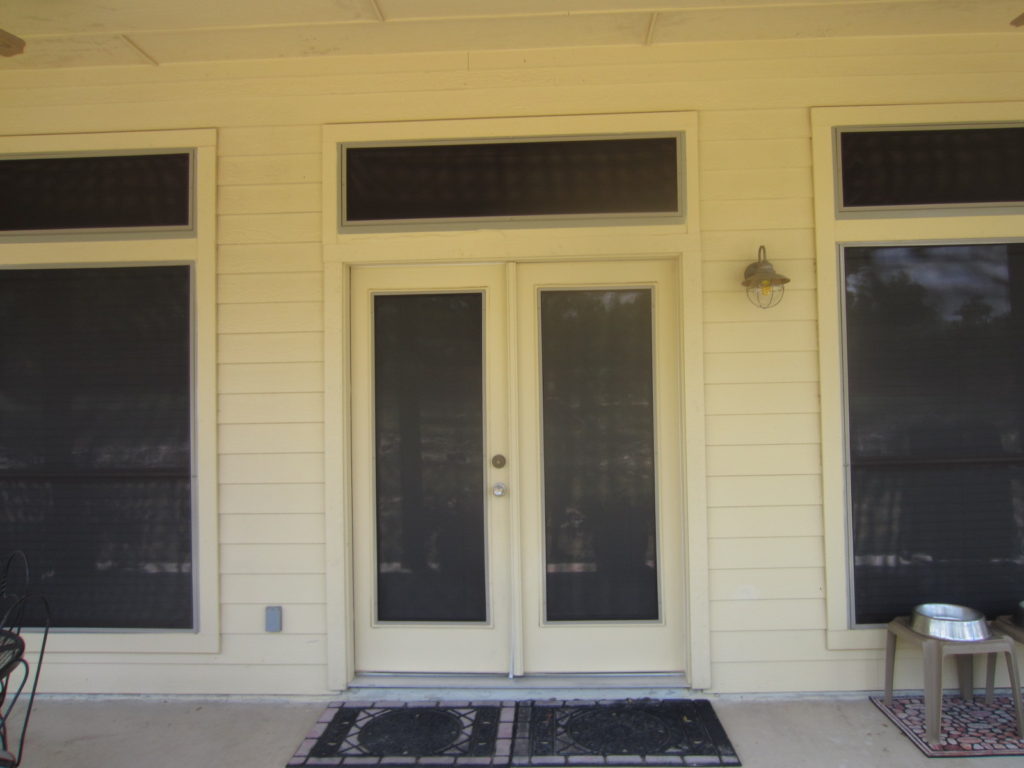 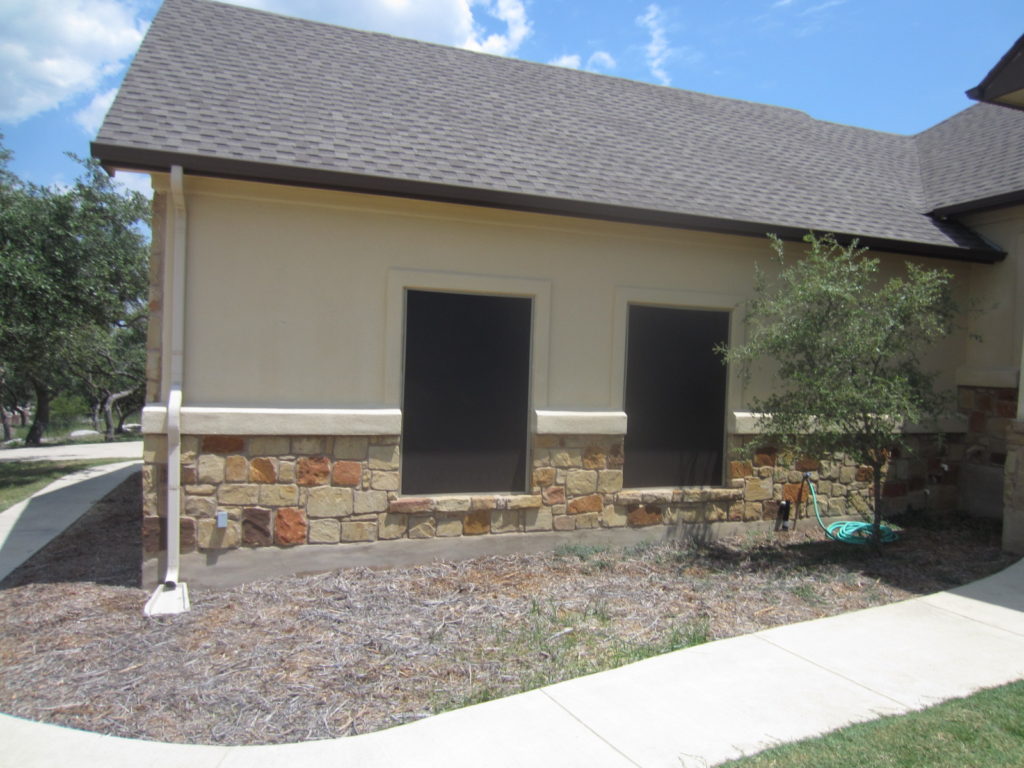 The owner of this property chose to put solar screens on the garage which is what this picture is of.

This customer even put solar screens here on the small windows. I applaud his effort for continuity. 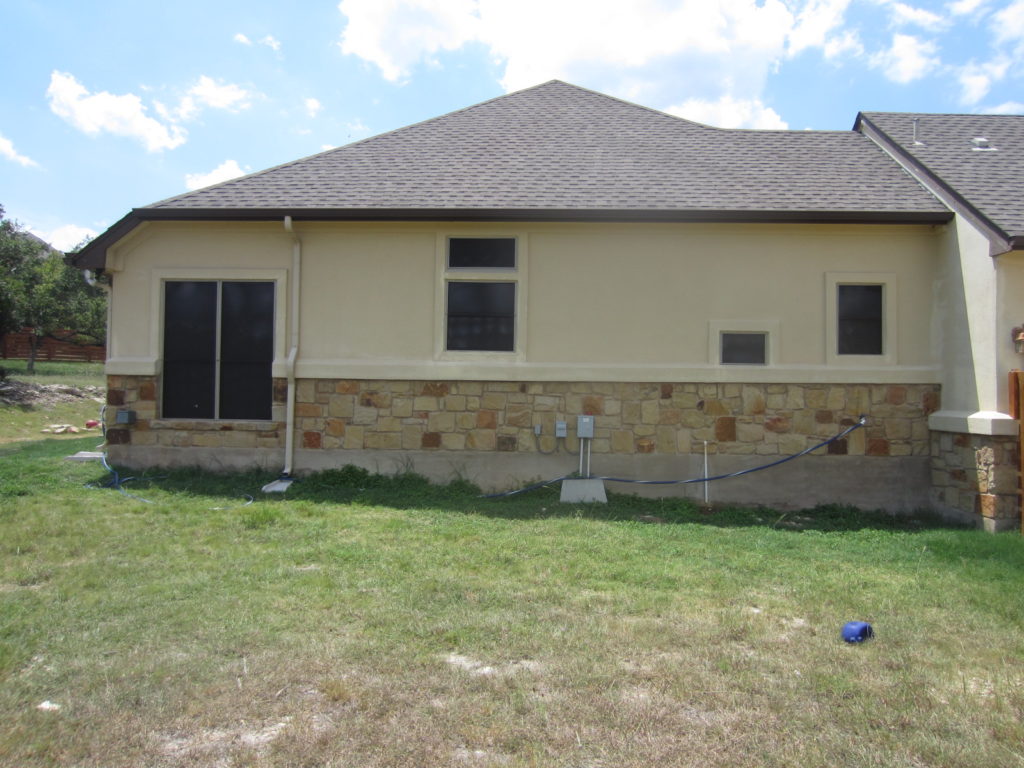 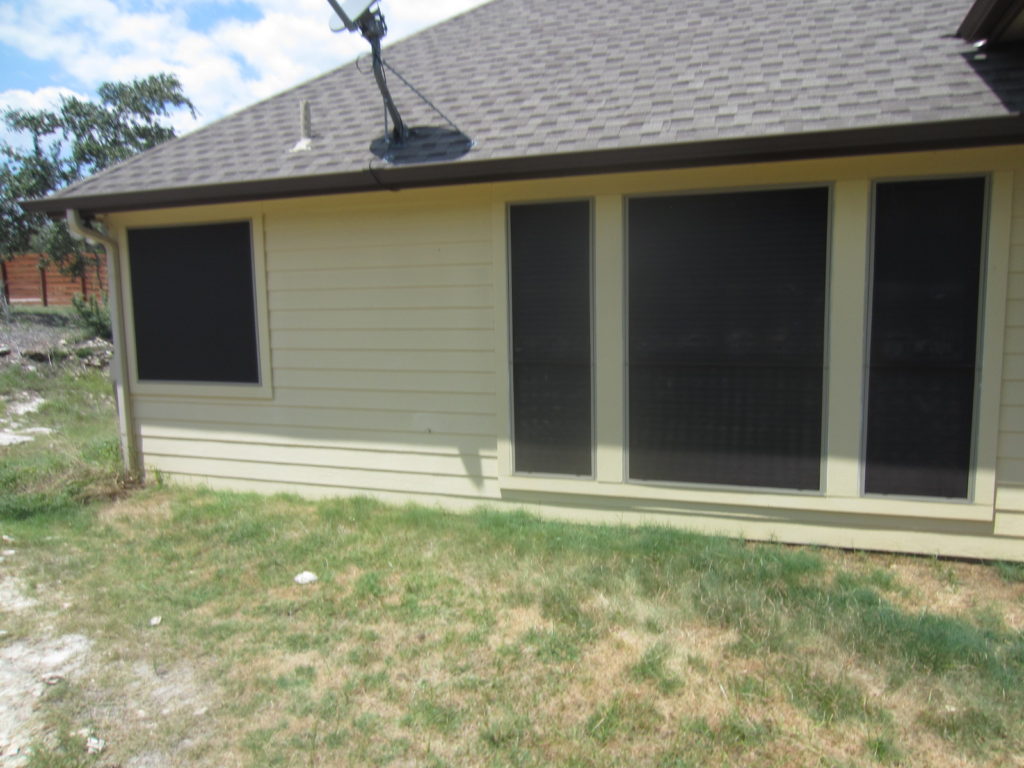 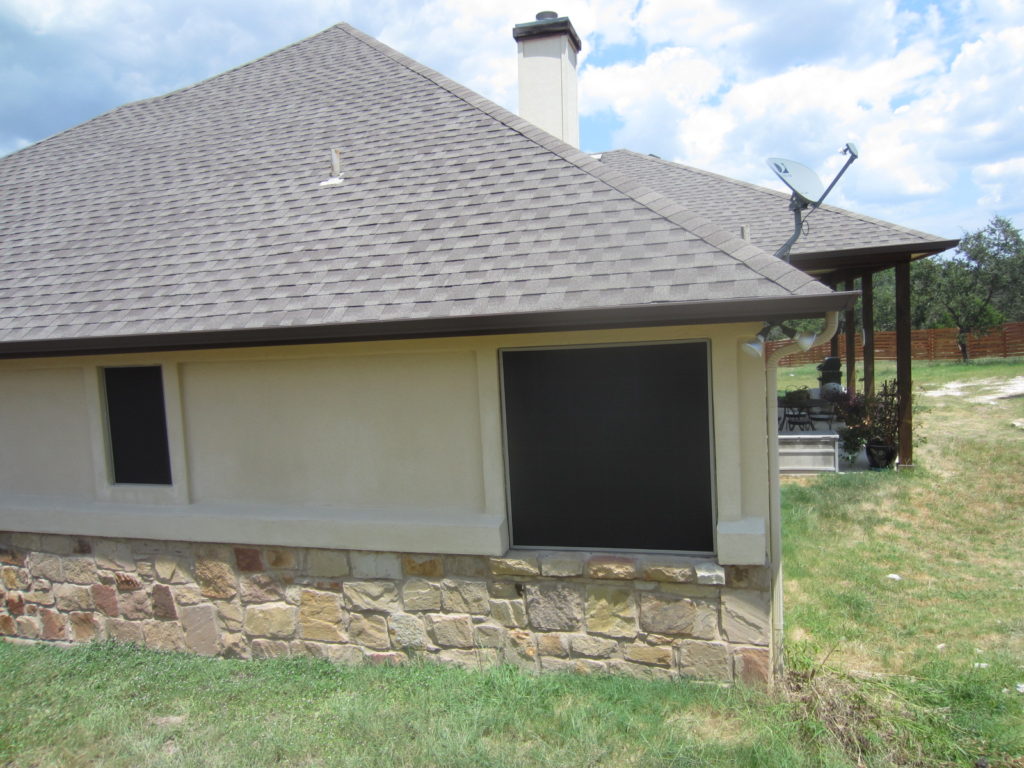 Right side of home using 90% fabric.

This is the right side of the home that get’s full on afternoon west-facing sun. Being that this is a side of the house that gets clobbered by the Sun, we used the 90% solar screen fabric. That 90% Fabric lends quite a bit more shade verses the 80 percent and in situations like this, where your windows get more than 4 hours of Sun, we highly recommend that 90% fabric.